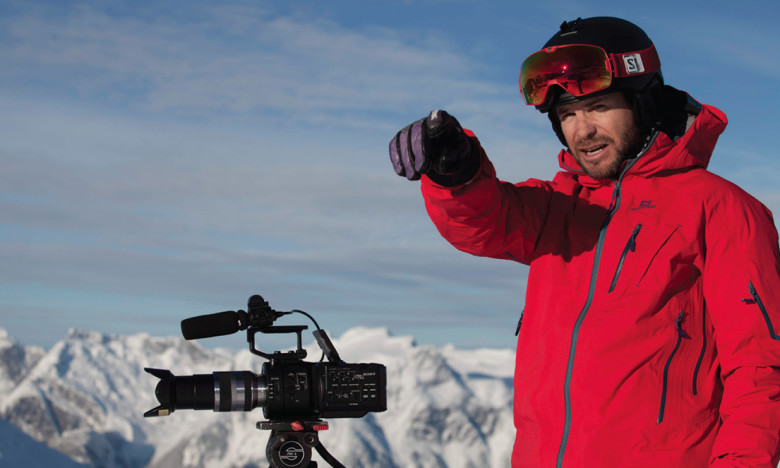 Campbell River, B.C., native Mike Douglas’s impact on alpine skiing is the stuff of legend. Arriving in Whistler as a young ski bum in 1988, when racers and mountaineers dominated the scene, Douglas gravitated to mogul skiing, where he excelled as a competitor and, eventually, coach. He sidestepped the dead-end of regulated FIS freestyle by helping to create a groundbreaking twin-tip ski that allowed him and his “New Canadian Air Force” posse (JP Auclair, JF Cusson, Vinnie Dorion, and Shane Szocs) to launch an international freeskiing revolution.

Though already an elder statesman as the resulting park-and-pipe scene exploded, he was far from done. With the Coast Range as a backdrop, Douglas re-invented himself as a big-mountain skier and perennial film star. Then, before wear-and-tear or age could ground him he leapt again—to the other side of the lens with his genre-defining Salomon Freeski TV web series. Soaring as quickly up filmmaking’s learning curve as he had every other, Douglas’s production company, Switchback Entertainment, was soon producing award-winning shorts. His feature-film directorial debut with Snowman—a tale of snow-obsession and its trials—brought his greatest challenges yet, lessons the 46 year-old father of two has undoubtedly banked to leverage his next creative move. // switchbackentertainment.com

How did Salomon Freeski TV start and what has its impact been?
I was already involved in creative film editing and saw an opportunity to tap into something that wasn’t being done yet. Back then ski movies still relied on the ski-porn formula and there was little web content. YouTube was only born in 2005 and SFTV launched in 2007. Now we’re into season nine—the longest I’ve ever done anything. Over the years we’ve evolved it in many directions; compared to earlier stuff we’re on a completely different level now in terms of production, quality and storytelling. Ultimately, I think we showed that ski stories could be told along a broad spectrum and still be interesting.

Your short films are something unheard of in the ski world—intimate portraits. What drew you to that and how did you deal with the recent death of one of your subjects?
Short films weren’t on my radar. But I was invited to submit to the Mountainfilm festival in Telluride, and went to check it out. It opened up a world of inspiration. Our first film, The Freedom Chair, won 15 awards, but a strong character like [paraskier] Josh Dueck makes storytelling easy. The next, Tempting Fear, was different—a snapshot into the mind of Andreas Fransson through his journals—a story that didn’t present itself right away. But getting into his head put me at peace with what he was doing. When Andreas died, I thought of his quotes in the film.

Your first feature-length film, Snowman, is also a portrait. How different was that project?
Very. I realized what I’d bitten off a year into it. I’d given myself two weeks to assemble the first parts of the film, but was in the edit suite only three days before realizing how underprepared I was to take on something of that scale. There were so many holes in script development, quality footage, proper sound recording, etc.. I saw it wasn’t going to be like previous films where things happened quickly, that it required an entirely different level of commitment to bring to life. It was basically like going to film school for two years. And I’m still in it—dealing with the legalities of releasing a film.

From the latest issue of Mountain Life Annual. Available on newsstand and through digital download here.