The digital quilt of eclectic accomplishments on brucekirkby.com alone should convince you: this guy must spend as much time thinking up travel and expedition ideas as he does planning and executing, making for an envious fulltime occupation. Indeed the widely recognized wilderness guide and award-winning writer/photographer’s prolific adventuring includes a 1,200-km camel crossing of Arabia’s Great Southern Desert (subject of his excellent 2000 book, Sand Dance), a descent of Ethiopia’s Blue Nile Gorge by raft, a coast-to-coast Icelandic trek, and numerous other circuits marrying various means of land/water self-propulsion.

Still, it’s hard to imagine any of this preparing one for crossing the Pacific, sailing the Ganges, or trekking the Himalaya with small children in tow—Kirkby’s latest enterprise and subject of the Travel Channel’s nine-episode Big Crazy Family Adventure.

The show follows Kirkby, wife Christine Pitkanen, and boys Bodi and Taj on a 21,000-kilometre journey from their Kimberley, B.C. home to a remote Tibetan monastery. Employing only surface travel in order to fully experience the life-changing and serendipitous moments such exploring delivers, viewers embrace the idea of intrepid kids following their parents to the literal ends of the Earth. As for paterfamilias Bruce, his passion for the outdoors shines through as enthusiasm genuine enough to usurp Clark Griswold as patron saint of family travel.

You’ve come up with a lot of travel ideas—what was the genesis of this one?
The idea evolved on two fronts. First, after our second, Taj, was born, we did an 80-day horse-supported trip across the Republic of Georgia while he was still breastfeeding and his brother was four. It convinced us you can’t replicate that kind of one-on-one time; at home things always get in the way. The wilderness is my church but travelling in the Himalaya I’d always enjoyed being around Buddhism, and remained curious about it. Christine as well, so we thought it might be interesting to spend some time in a Buddhist monastery…with the kids. The second part—surface travel—entered the picture because there was something romantic about it. 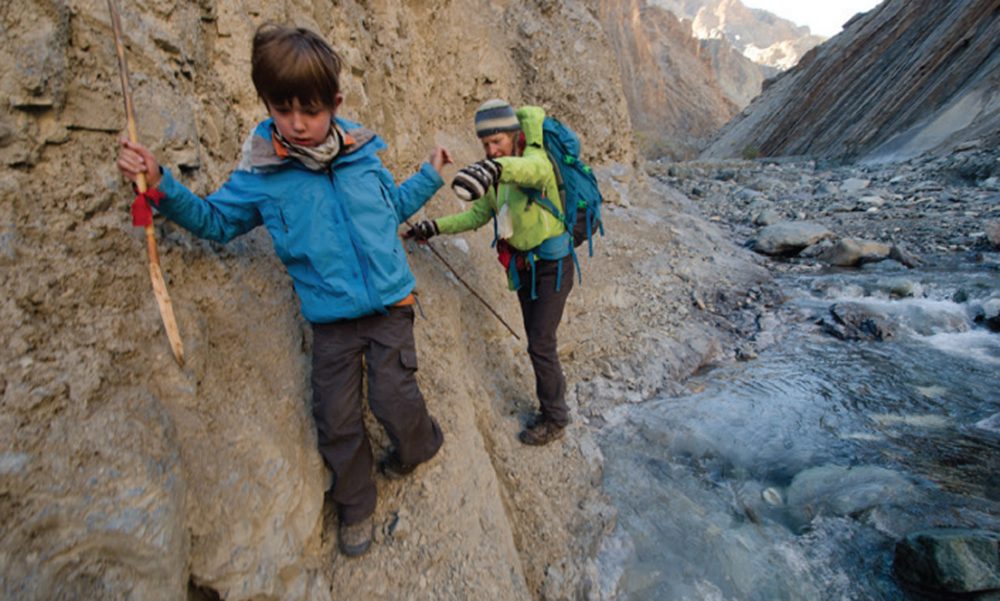 And the resulting television series?
Having worked in TV, I don’t always put stock in producers. But this one young Australian I was in contact with loved the idea, and one day called to say we had a green light. My first thought was if you don’t have a crew that’s part of the story it’ll feel like something’s being faked, so I suggested one or two embedded filmers. But the network had a different idea: helicopters and a crew of 16—ha! Over the course of the trip we probably had 85 different people with us. But it didn’t diminish the experience, only changed it. The kids developed meaningful relationships and still Skype with some of the crew.

Without giving too much away, highlights and lowlights? Lessons for the rest of us?
The monastery experience is a highlight. A low was our boat trip down the Ganges to Varanasi. It was described as “luxurious,” but, well… at 9:30 p.m. we were still on the water, the kids were hungry, and a mayfly hatch had coated our faces with insects. Then we all had to sleep on a sliver of a board in a fixed-up, gasoline-soaked bilge. A lesson is how adults develop such a need to know: ‘Where’s the hotel, how good is it?’ But when you walk out the door with kids they just kind of go with the fl ow: ‘Oh look—here’s a mattress to jump on.’ The thing that sticks out most in photos is how much our boys are smiling.