The Be the Change Film Series, now in its eighth year, has been transformed. Now located in the Simcoe Street Theatre (across from the Collingwood Library), the series will feature two screenings per night at 4:30 and 7:00, a marketplace of local vendors and artisans, refreshments including local cider, beer and wine, plus fresh food and coffee just down the hall. 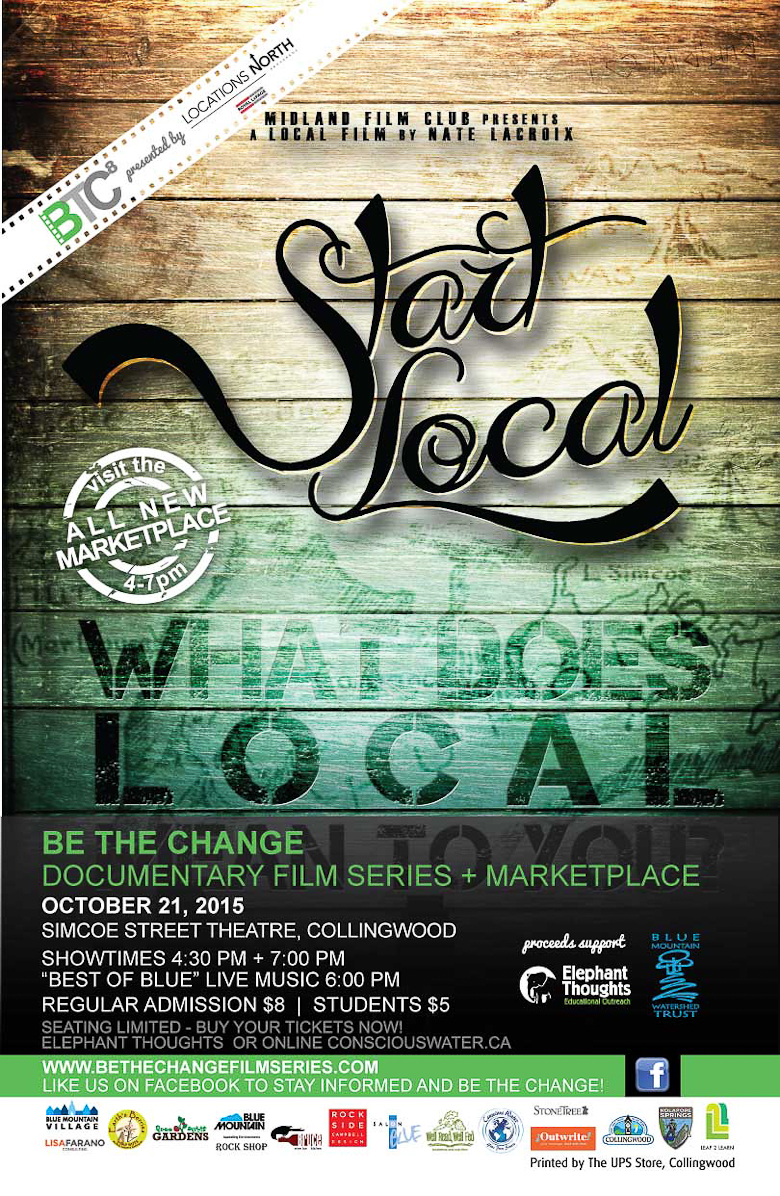 “We are creating more of a community, almost a festival atmosphere in this fabulous venue,” says Christy Deere, one of the principal BTC organizers. ”With two screenings, the first at 4:30, we expect more students and seniors to come out to the films, and of course our marketplace, food and beverages will be a big draw. The Simcoe Street Theatre has a great deal of space for vendors and for moviegoers to connect with like-minded community members.”

Presented by Locations North – Royal LePage, the series is designed to unite Collingwood and surrounding communities around a variety of issues. Provocative, carefully chosen films are selected around themes such as growing food sustainably, resource extraction, and climate change.

As in years past, proceeds from BTC will benefit two local organizations: Elephant Thoughts, a childhood education-focused charity, and The Blue Mountain Watershed Trust, a local environment-focused charity.

Start Local is a feature-length documentary that examines the importance of connecting with your local community. Whether it be through food, business, art, or charity, Director Nate Lacroix takes a closer look at what ‘local’ means to those who are impacted by it the most. “The more we look to buy local products the more local products will become available to us and at a more cost effective price. So it’s a win-win all the way around.” Start Local inspires us to make the choices to invest in our friends and neighbours and celebrate our pride of place.

Fractured Land follows Caleb Behn, a young Dene lawyer from northeastern B.C. as he and his indigenous community confront the complex issues arising from fracking for natural gas in their territories. Shot over four years, filmmakers Fiona Rayher and Damien Gillis trace Caleb’s development, through law school, as he reconciles the fractures within himself, his community and the world around him, blending modern tools of the law with ancient wisdom to build a movement. To quote 350.org founder, Bill McKibben: “Anyone who can throw a hatchet and sue you is a force to be reckoned with.”

Directed by Avi Lewis, and inspired by Naomi Klein’s international non-fiction bestseller This Changes Everything, the film presents seven powerful portraits of communities on the front lines, from Montana’s Powder River Basin to the Alberta Tar Sands; from the coast of South India to Beijing and beyond. Interwoven with these stories of struggle is Klein’s narration, connecting the carbon in the air with the economic system that put it there. Throughout the film, Klein builds to her most controversial and exciting idea: that we can seize the existential crisis of climate change to transform our failed economic system into something radically better.

Life Off Grid is a two-year journey exploring the lives of Canadians in every province and territory, who have made the choice to disconnect from the myriad of grid lines surrounding our day-to-day lives, entering and exiting our homes. These grids (electrical, cable, gas, water, sewer, etc.) constitute extensive and powerful webs through which our lives are entangled and suspended. Life Off Grid is a film and book about people who have chosen to build their lives around renewable energy, with beautiful, inspiring, and often challenging results. It is about different lands and islands. It features stories about people that came from all over to find, quite literally, a piece of earth.

Drawing from ancient knowledge and cutting-edge science, Symphony of the Soil is an artistic exploration of the miraculous substance soil. Written, directed and produced by filmmaker Deborah Koons Garcia, this film explores four continents, features esteemed scientists, working farmers and ranchers, highlighting the possibility of healthy soil creating healthy plants creating healthy humans living on a healthy planet. Symphony of the Soil examines our human relationship with soil, the use and misuse of soil in agriculture, deforestation and development, and the latest scientific research on soil’s key role in ameliorating the most challenging environmental issues of our time.

In 1971 a brave group of young activists set sail from Vancouver in an old fishing boat. Their mission: to stop Nixon’s atomic bomb tests in Amchitka, a tiny island off the west coast of Alaska. It was from these humble but courageous beginnings that the global organization now known as Greenpeace was born. Compiling the fascinating untold story behind the modern environmental movement, largely through 16mm archival footage, Jerry Rothwell tells the stories of eco-hero Robert Hunter and the group of like-minded and idealistic friends in the ’70s, who altered the way we now look at the world and our place within it.