Long-distance winter travel is my specialty. My most recent trek along Quebec’s North Shore marks the 20th time I’ve pulled a sled through the northern wilderness in temperatures as low as -54°C. This trip, I invited fellow writer and avid outdoorsmen James MacKinnon to join me. MacKinnon is no stranger to wild adventure. He spends most of his time snowboarding, mountain biking, and big-wall climbing.  He’s even  scaled the coveted Nose on El Capitan.  However, even MacKinnon has never attempted to winter camp, let alone do it during the coldest winter the region has seen since 1908.  Despite his winter inexperience, James turned out to be one of my best partners. He was strong, a quick learner, good-humored and tapped into a deep fund of patience and stoicism necessary in an arctic traveler.

Words and Images by Jerry Kobalenko 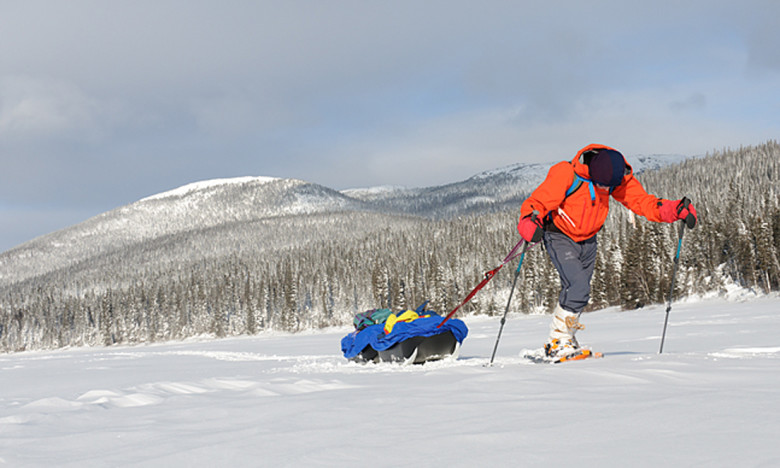 We planned to snowshoe a grueling 400 kilometers along the lower North Shore in Quebec. Our route started in subarctic Labrador, journeying south from Goose Bay ending in St. Augustine. During the 34 day trip, 12 were -40°C or colder with one morning dropping to a numbing -50°C, a temperature causing liquid to freeze before hitting the ground. In addition to weather conditions, we had to manage our body temperature. The key to trekking though such extreme temperatures is to manage your heat and how much you sweat, this is where merino wool really comes in handy. It sounds strange, stripping down layers and removing hats at 40 below but the key to winter travel is to hit that perfect balance between being warm and being cold; in freezing temperatures sweat is your biggest enemy, not the cold. 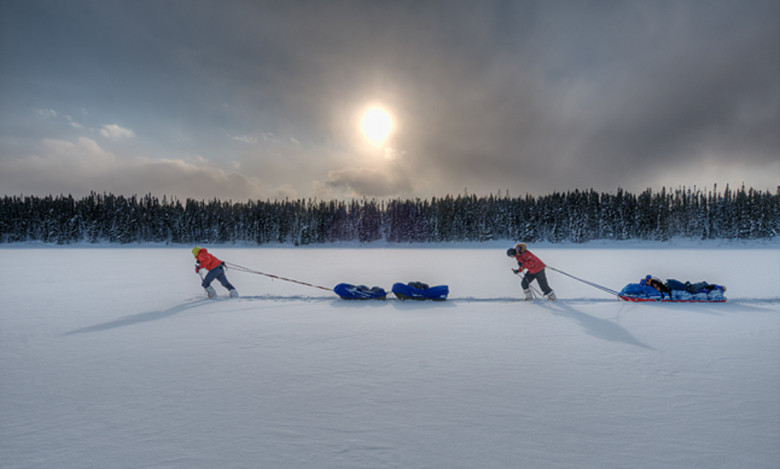 During the day, an arctic traveler stays warm by perpetual motion. One typically takes a break every two hours to eat and drink, however these stops must be brief to ensure you maintain exercise warmth. Day clothing uses standard outdoor layers including a first layer, mid layer and a shell, with a parka on the sled for quick warmth when necessary. However, the evening is a different story. The moment you stop exercising, you put on seriously warm clothes, including baffled parkas, insulated pants and double-thick camp booties. In this Michelin-Man state, you can stay comfortable during the several hours of camp chores. When it’s time to crawl into the sleeping bag, you partly strip down again, so that too-bulky clothing doesn’t compress the insulation of the sleeping bag.

We began our trek mid-February, on a bone-chilling 40 below morning.  Our sleds were packed with enough survival gear and supplies to last one month.  We planned to manhaul or pull the sleds as we embarked on our journey. Down south, manhauling doesn’t work well because the sleds sink in soft snow, making pulling 80 kilos of food, fuel and winter camping gear near impossible. However, in the open Arctic, cold and wind transform powder snow into a hard Styrofoam-like surface, which is the secret to arctic sled travel. However, due to massive snowfall in southern Labrador, we were not so lucky. Even on snowshoes, James and I sank up to our shins while our sleds dragged like potato sacks due to the friction caused by the frigid snow. 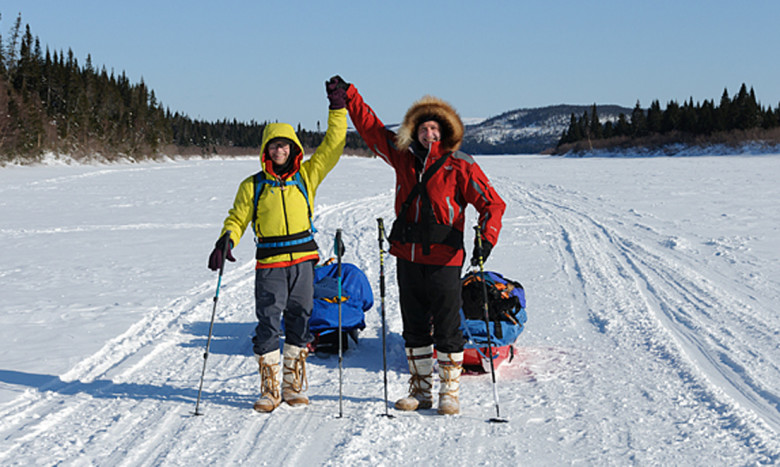 That first day, we made miserable mileage: seven kilometers for seven strenuous hours – less than half a typical daily sledding average. This tortoise pace continued day after day, while the snow stayed soft and heavy. At this point, every morning we just put our heads down, joked about the misery ahead and pushed forward. In the Arctic, you never think about the destination as it’s too far away. Instead, you try to grab little moments of pleasure; observing the moose grazing on willow bushes along a frozen river, the sun glittering through a black spruce forest, the warm supper awaiting you in the tent and of course, the exquisite pleasure of crawling into your warm sleeping bag.

Our slow pace continued until we stumbled onto an old snowmobile trail left recently by a St. Augustine trapper. We latched onto this informal highway, and our daily mileage doubled. The trail grew harder as we approached the little town of St. Augustine. After 34 days, of rugged travel and freezing temperatures, we dragged our sleds onto the snowy beach, where a friend greeted us. At last, sitting in the warmth of his home, we remembered the luxury of comfort and heat.

For more information on Jerry and his adventures visit his website or find more stories at Icebreaker.