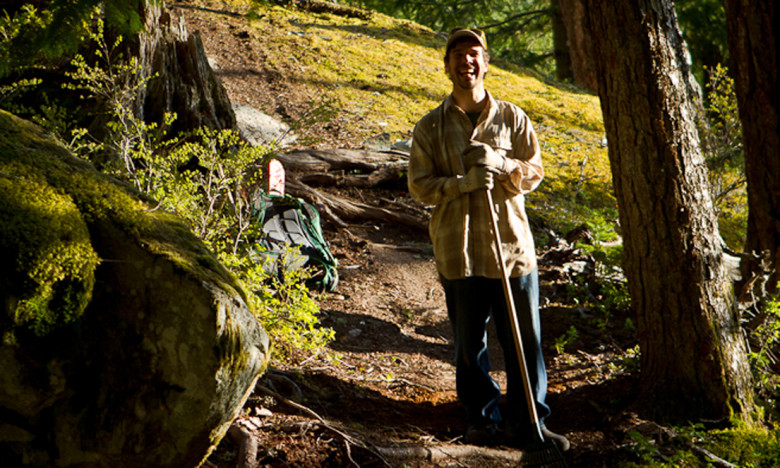 Not many people can draw similarities between spinning high above the deck of an Olympic snowboard half pipe and spending countless dirty, sweating hours constructing mountain bike trails but Dan Raymond has done both and claims that although the tasks differ greatly, the process is somewhat indistinguishable.

“I feel that you can experience something in your head and get the same physical reaction, the same adrenalin rush, as when you do it for real.” Dan chews this thought over some, takes a swig from his beer (craft beer, it has to be said) and continues explain that being able to visualize snowboard tricks always helped him excel and the same technique works for building bike mountain bike trails because, “I can imagine riding a line that doesn’t exist yet, and actually feel the fun to be had if I built it.”

Dan’s entry into competitive snowboarding was sort of backwards – he started out as a coach and then became a professional athlete. He was, as he puts it, “a nerd ski instructor” who relished the act of learning. “I found that the cognitive aspect of learning about snowboarding made me progress as an athlete really effectively,” he says. “At first I just wanted to do a season competing on the World Cup so I could be a better coach, so I would know what it was like to be at that level. But that turned into eight years as a competitive athlete and culminated with my retirement after the Vancouver 2010 Winter Olympic Games.”

After retiring, Dan needed a new learning outlet, something that he could unravel and understand. That summer, while out riding his mountain bike, he came across a section of trail high up on the Flank that seemed to go nowhere. “It suckered me in,” Dan recalls. “I thought to myself, I have to do something here, it’s beautiful terrain.” What he thought would take just a few afternoons to complete ended up filling three summers of his spare time as Dan created Rockwork Orange, Korovo Milkbar and Wizard Burial Ground, a series of interlinked trails that have already become Whistler classics.

The same thirst for knowledge and ability to visualize and experience success that had worked for snowboarding, transferred easily into trail building. Not all of Dan’s dirt education was entirely self-driven— he sought the guidance of other local master builders and advice from the riding community. He even took on an apprenticeship of sorts with the Whistler Municipality trail crew under the tutelage of Eric Berry and Leanne Patterson.

A good builder must be able to imagine a line and know how to go about creating it. When riding Dan’s trails, it’s easily apparent that he has the ability to visualize a line that works with the terrain – something that can’t be taught – but also the learned skills and techniques to make these lines a reality. It’s art, really.

“I see trails as aesthetically beautiful things that, with time and destruction, can become horrible scars,” Dan explains. “I don’t particularly like braided trails. You can see where a builder has not anticipated the speed of riders or how riders will actually ride the trail, and that leads to damage.”

“Trailbuilding has made me obsessive to the point that everywhere I go I am looking at the terrain and imagining what a trail would look like in there.”

Dan says that he enjoys remediating flawed trails and creating routes that go where the riders will go. “It’s about creating with flow so the experience is best,” he explains. “I hate seeing trails that are ten feet wide because… it’s ugly.”

Making a line that flows well for a rider is one thing, but Dan also needs to create trails that will last past the first full summer. This means working with the gradient, looking for natural features, and efficiently using all the materials Mother Nature provides – rock lasts forever, dirt can be mined and placed on the trail bed if necessary and good cedar can be employed to span soft ground or challenging terrain.

To properly visualize a trail requires true talent, but most of all builders need patience. “Everything takes a lot more work than you think it will,” Dan says. “It doesn’t matter if you want to add a berm to something, or build a jump, or clean out a rock to add a line to your favourite trail, it will always be harder than you thought and take longer.”

Dan’s craftsman appreciation for the techniques of trail building and his artist’s ability to build durable, flowy trails with subtly disguised smart design features has landed him a job with the Whistler Off Road Cycling Association (WORCA) building part of the 3-year Sproatt alpine trail project. While the Municipality constructs a multi-use climbing trail, Dan and others will be working on a blue-grade descending trail that will eventually create a loop from the valley to the alpine and back. “Sort of like a downhill version of Comfortably Numb,” Dan explains, referencing the classic Whistler trail that enjoys official “Epic” status as awarded by the International Mountain Biking Association

For Dan, it’s about the work more than the accolades. “Trailbuilding has made me obsessive to the point that everywhere I go I am looking at the terrain and imagining what a trail would look like in there. It occupies my time and my mind in the same way that imagining my half pipe snowboard runs would when I was competing.”

And this is good news for local mountain bikers, because when Dan’s imagination runs wild, it’s an even wilder ride for the rest of us.