Since we started Mountain Life: Coast Mountains almost a decade ago, mountain biking has essentially taken over the world. So it made sense that the first 13-page SuperFeature we’ve ever published in the mag be about biking. This eight-part online feature comes from the Summer 2015 “Wheels & Water” issue and we feel they give a good glimpse of the scope and quality of riding offered in B.C.’s South Coast. Ride on!—Feet Banks, editor, Mountain Life: Coast Mountains

For decades, most Coast Mountain-ers knew Squamish as little more than a roadside refueling station with a hick reputation and an ever-present odour of pulpy, wet farts. Set almost exactly halfway between Vancouver’s legendary North Shore and the much-hyped riding in Whistler, old-time Squamish locals endured decades of ridicule and general excommunication by the “snobs” living to the north and south. 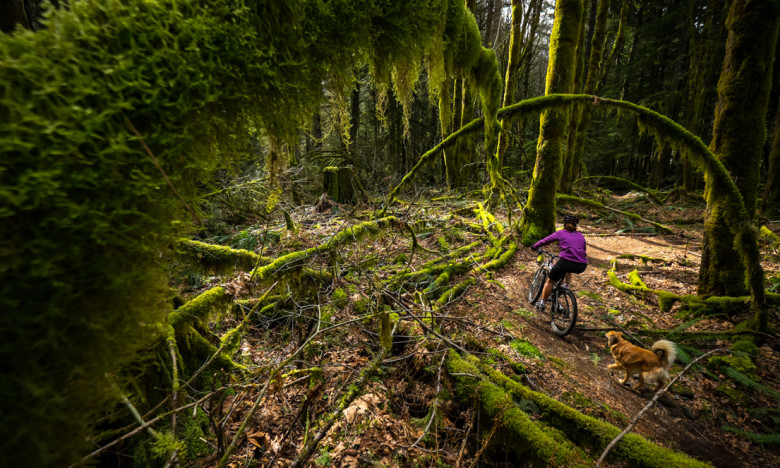 “Squamish was rough in the late 90s,” says Damian Kelly, a Whistler kid who moved south in 1993 at age 19 and “dirtbagged” for a few years before jumping into Squamish’s fledgling ‘rec-tech’ industry. He founded Bad Monkeys Design, a branding, strategy and design company that’s now been working with top outdoor brands for the past two decades.

“You had to create your own job here back then, if you didn’t want to be in forestry,” Kelly explains, “but that is also what made it rad and kept it from being overrun or turned into a resort — real people lived here, and real businesses.”

And some of those people were riding bikes. The Squamish Off-Road Cycling Association (SORCA) started in the early ’90s and quickly began pioneering trail access cooperation between bikers, builders, governments and other user groups.

Ted Tempany was a Whistler DH rider with a talent for building bike trails when he moved south in 1999 and founded Dream Wizards, one of the most respected trail building teams in the world. Joyride pioneer Paddy Kaye had already relocated in 1997 and Christian Begin, director of the seminal freeride film Kranked, arrived in 2002. But the biggest groundswell occurred after the closure of the Woodfibre pulp mill in 2006. Once the air cleared and the Olympics were on the horizon, the little roadside gas-stop town began to boom.

VentureWeb, an adventure and recreation-specific digital marketing agency, moved to town in 2006. Top-of-the-game mountain bike filmmakers Anthill Films set up shop in 2008, joining a host of other filmers, photographers, designers, writers and guides making a living across a number of different outdoor pursuits. In 2014, after a lengthy public process and some epically pedantic Facebook arguments, Squamish rebranded itself as “Hardwired for Adventure,” a nod to the rise of local rec-tech and a precursor for the arrival of Squamish’s best known tech business yet: Pinkbike.

Since December 2014, the headquarters of mountain bike media superpower Pinkbike.com has been a quiet and unassuming office space down in the closest thing Squamish has to an arts district. Their space is dominated by a 41-inch flatscreen display of the world map, monitoring Pinkbike’s website traffic in real time with tiny exploding red and blue circle ‘hits’. England is blowing up, same with both coasts of North America. New Zealand pops suddenly, Brazil, Iceland, somewhere in Western Africa. Below, an info bar keeps a running tally: 70-94 hits per second from 100-121 countries. Pinkbike definitely puts the tech in Squamish rec-tech. 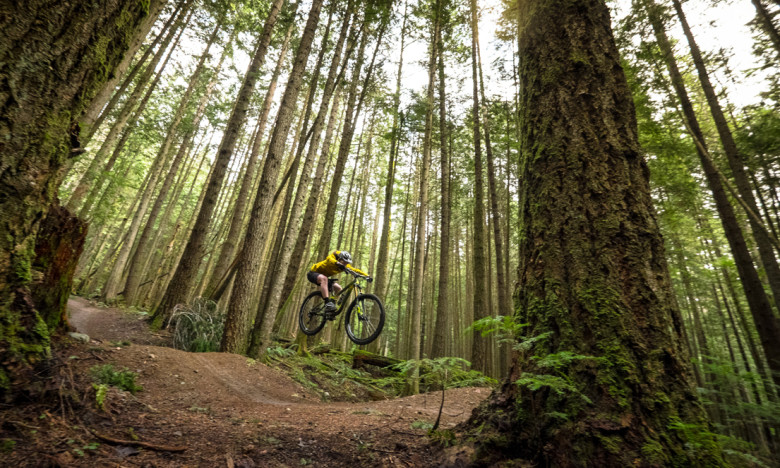 “It’s been a long time coming,” says Alan Golds, who moved to Squamish from Whistler specifically to work for Pinkbike. “The riding here is comparable to anywhere and our partnership with Crankworx makes this that much better a place for us.”

“And Semenuk lives here,” adds content director, Tyler Maine. “That helps — the best in the world. But there are lots of young companies here as well . . . you just want to be in the hub.”

As of 2014, that hub includes industry-leading bike component engineers at OneUp Components, as well the world’s first cycling apparel company to use GORE-TEX® fabrics: 7mesh.

“This is the perfect place to build a product, test it right outside your doors, and tweak your design all in the same day,” says Brian Goldstone of 7mesh. “What we’re going after is getting people into enjoying all aspects of riding and understanding why people like to ride. And Squamish is a great place to do that.”

Of course, as Squamish’s rec-tech bubble expands, it draws more cyclists into town — great for the economy, but not always ideal for a 25-plus-year-old trail network. “Squamish has 174 mapped trails now,” says Ted Tempany, who has built or maintained most of them. “I think it is super important that we don’t try to grow our trail network too quickly without maintaining the assets that we have, and any new development needs to be built to a really high standard. That means establish solid arteries that connect the town and whenever we get a chance to improve the beginner or intermediate trails, we should. That’s how you build the sport.”

And so as sport, and the industry that supports it, continues to discover Squamish, that junky little gas-station town has suddenly become the popular prom queen of the Sea to Sky. She’s beautiful but she might have a little chain grease on her shins still, it was a long ride to get here.