After eight months of conceptualizing, pre-production, filming and editing, the latest project from Sweetgrass Productions, Darklight is now live. Taking queues from their earlier, groundbreaking ski films, Sweetgrass’ Zac Ramras and Mike Brown, both mountain bikers at heart, talk about their first foray into the world of professional mountain bike film making.

Tell us a little about the film?
Zac: The film is a nighttime mountain bike film. I’d even say it’s a psychedelic mountain bike film that follows three riders, Matt Hunter, Graham Agassiz and Matty Miles, through this nighttime playground. It’s a unique partnership between Philips Amblilight and ourselves. They reached out to us to create a piece that would be a unique night film in the bike industry.

How did the idea come about?
Zac: We’d actually worked with Philips in the past, and this is a follow up to a project we did in skiing. So we’re taking some ideas from the past, and putting them in a new arena, and trying to come up with some new ideas in the process.

What was it like working with Graham, Hunter and Matty?
Zac: The bike industry is new to us. We got our start in the ski world, so we were pretty excited to step into this new arena. Both Michael and I grew up mountain biking in the hills of Salt Lake City, so were pretty excited to catch up with these guys. We’d seen them in videos for many years, so it was pretty exciting. When we finally got to working with them, we were not necessarily surprised, but happy to know that these guys are just mellow, hardworking guys and were easy to work with.

“A new toy we were playing with on this shoot was a flyline cable cam system that allowed us to go into the forest and do these high-speed tracking shots and have the camera traveling at 40 miles per hour by remote control.
That was fun.”

What was their initial reaction to filming at night?
Zac: We got a really good response. There is a lot of crossover awareness between skiing and mountain biking. We basically watch mountain bike films and get inspiration from that world, and it’s also true the other way. They were all really excited, having seen some of the work we’ve done in the past. And I think they appreciated working with us as filmmakers with a unique take on sports filmmaking.

What was the biggest challenge in making the film?
Michael: I would say that from a fundamental level, these projects are incredibly difficult because you’re doing something that doesn’t have a precedent or any type of formula to follow. So when you start out, there are no answers to your logistical questions, so a lot of the time you’re doing this stuff on the fly, and you just hope you have good team members that are crafty or have an engineering background.

Zac: That’s a tough question, because there were many challenges along the way. I think when doing these hybrid, Hollywood-style action sports pieces, there are just so many factors that go into it. We had such a large crew, 27 members, traveling from Southern Utah to the Pacific Northwest. And all the gear that goes along with that.

What was a typical filming day like? We’re not talking about grabbing a GoPro and heading out to the pump track here.
Michael: It’s definitely a big production. One of the aspects of the way we shoot, is we put our strongest value on finding the most inspiring and powerful images and locations. So a lot of the time we end up filming in the most difficult places to the shoot in. For us, we’d rather overcome the challenges of the terrain and physical strain in order to make things the most amazing we can.

Zac: A day would start out with us waking up about 4 in the afternoon, gather as a group, have breakfast, and we’d send our first wave of team members to the site. They’d load thousands of pounds of gear, get to the site, and then basically for the next couple hours strap on 60-pound frame packs full of gear and hike it up to the spot, usually up some pretty steep slopes. Once we’d get close, we’d get the generators going, fire up the lights and our athletes would arrive on set. A lot of times we wouldn’t take our first shot till maybe 1 in the morning. And hopefully we’d get a couple shots before sunrise. Then we’d do it all in reverse and head back for dinner at 6 a.m.

“They didn’t have enough anti-venom to treat him, so he got put on a medical jet and flown to Phoenix to be treated.”

Any new technology used to create these images?
Michael: A new toy we were playing with on this shoot was a flyline cable cam system that allowed us to go into the forest and do these high-speed tracking shots and have the camera traveling at 40 miles per hour by remote control. That was fun.

What was the sketchiest part of the project?
Zac: Matt Hunter got bitten by a rattlesnake on, like, the third day of shooting. He got tagged by a rattlesnake. We had to offroad him out of the location and take him to the local hospital. They didn’t have enough anti-venom to treat him, so he got put on a medical jet and flown to Phoenix to be treated. It was pretty brutal and pretty scary, because that can go south in a big way. But amazingly, he was a trooper and was able to actually come back to film three days later.

That’s crazy. Did you guys lose it?
Michael: Oh yeah. But we try to have all our bases covered. We have an EMT on site, and he was able to whisk him away. The scary part is we get this call over the radio, and we have 20 people out in the desert at night moving stuff around, so everyone immediately looks to their feet to see if there’s a rattlesnake there. It just freaked everyone out, and everyone’s just sorta tip toeing around after that.

What was the coolest part of the project?
Zac: I would say for me, concocting this idea and seeing all these pieces come together, and being on set with some of the best riders in the world and an amazing crew, just all working on all cylinders and really seeing that vision come to life. Like when you view the footage and it’s exactly what you were envisioning in your dream a couple months before. 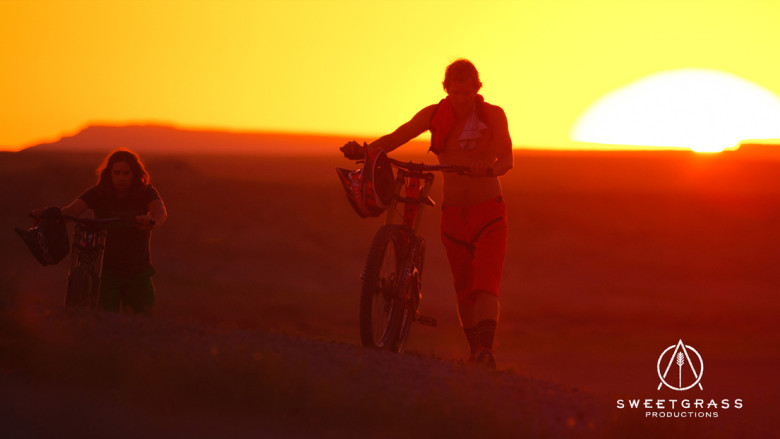