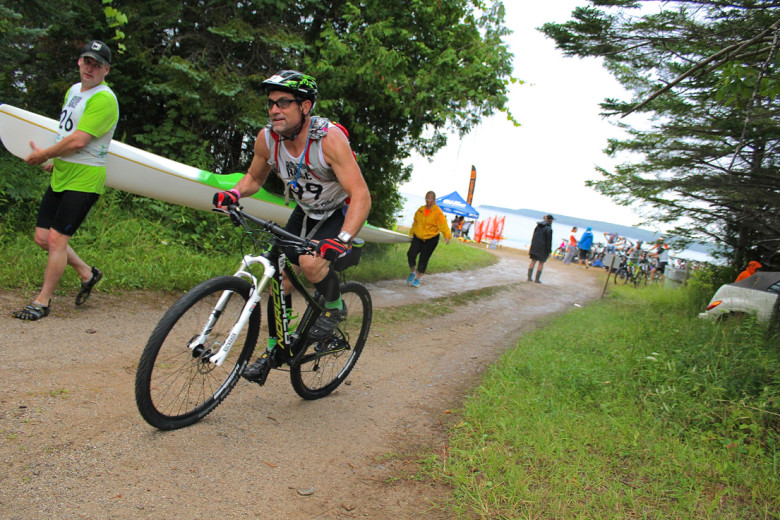 The Bruce Peninsula is arguably one of the more diverse places in Canada. It’s rugged and hardy—a craggy three-sided projection of land with innumerable inlets, bays, lakes, cliffs and cedars. It’s only fitting that this UNESCO World Biosphere Reserve would become the location for a challenging multisport race that rivals the best endurance courses in North America, all the while promoting health and outdoor sport in the last great wild of southern Ontario. 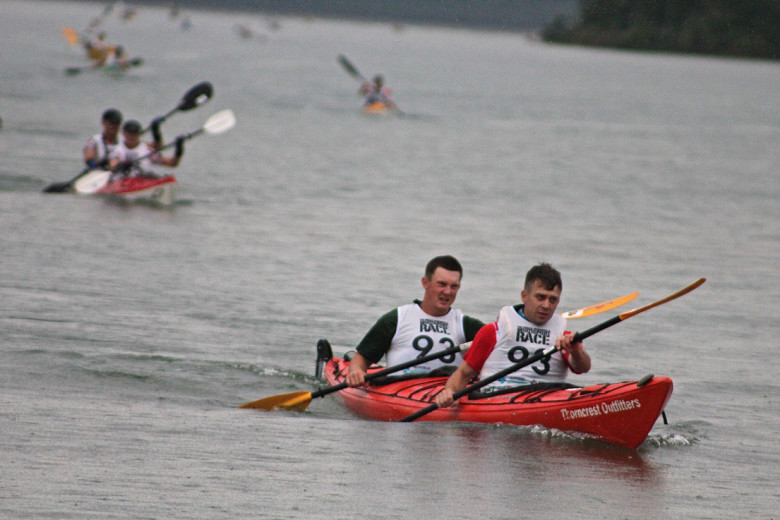 Grigg has a serious resume, making the BPMR a logistical haven for racers and volunteers alike. Leigh has helped organize BC’s Squamish Triathlon, Olympic & Commonwealth Games (Sydney 2000, Melbourne 2006, Vancouver 2010), and eventually ended up as the Marketing Director of Varsity Athletics at Lakehead University.

Grigg says the Bruce wasn’t chosen as the host location so much as the event was literally conceptualized specifically for the Peninsula and tailored to its unique attributes. And Van Dorp notes the BPMR’s humble beginnings were inspired by the Speight’s ‘Coast to Coast’ race in New Zealand.

“The distances are based on the trails and geography available, with the overall goal of something approximately 100 km in length,” says Van Dorp. “The main thing that makes this race location unique is that it takes place almost entirely on or below the Niagara Escarpment—from several places on the course you can see where you’ve come from and where you’re going next.” 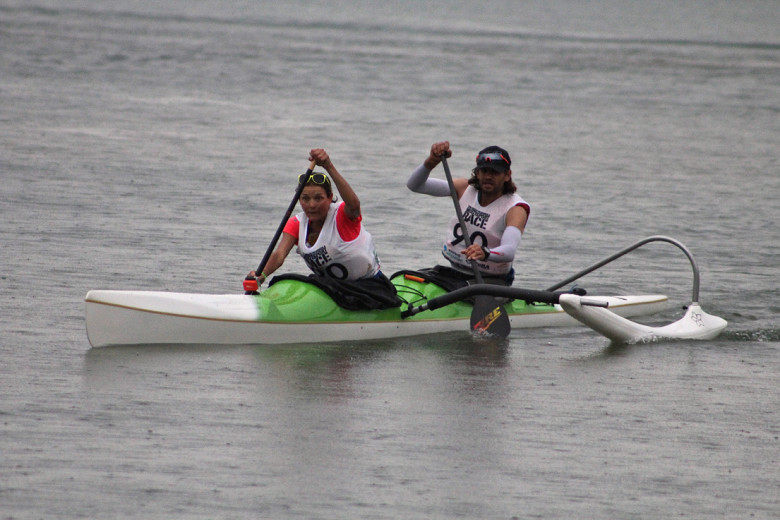 Grigg chimes in saying the BPMR has been called “one of the best organized races anywhere” by avid adventure racer Richard Ehrlich.

2014 saw the course compressed entirely into the Bruce’s Neyaashiinigmiing First Nation reserve, north of Wiarton. The compacted footprint means the course needs the support and help of over 60 landowners, who donate the use of their properties to the run and bike stages, as well as transition stages. The course is tweaked every year to accommodate the needs of the people who help make it happen.

The Buff Long Course is 100 grueling kilometers of paddle-mtb-run-mtb-run and attracts endurance athletes from around North America, but the BPMR also features an easily achieved 25 km short course.  These racers kayak or canoe for 4 km, mountain bike for 16 km on trails located on private land and then finish with a very scenic 5 km run along what Grigg calls “the nicest part of the Bruce Trail.”  Winners get awesome prizes from Suntrail – Source for Adventure in Hepworth and Alternative Wheels in Owen Sound. These two local shops also provide boat and bike rentals to the event. 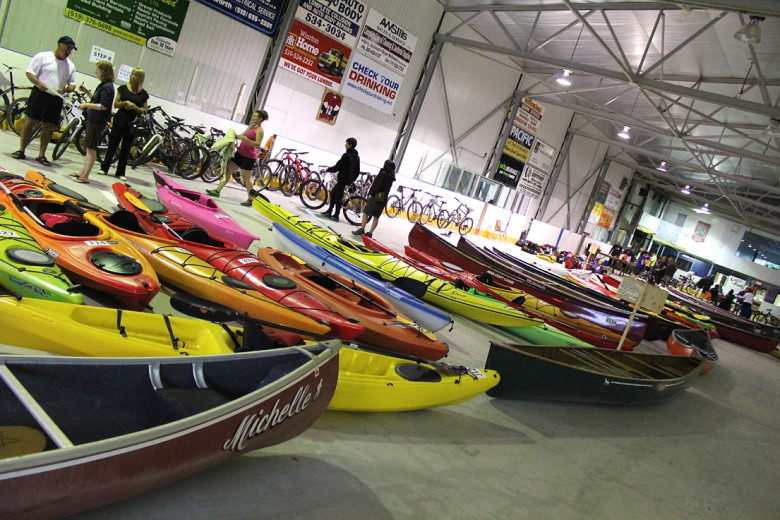 The race is also attracting some national attention. Last summer Yukon Airline, Air North caught wind of the event and offered support to the event immediately with some round-trip airfares to the Yukon that were donated alongside race admission to the famous Yukon River Quest, the longest annual canoe & kayak race in the world.

Air North also donated two round-trip airfares this year that will be awarding to the top finisher in both the male & female solo Buff Long Course categories.

“Buff Long Course racers are always pretty competitive just for bragging rights,” says Grigg. “And the adage that ‘pain is temporary but your result posted on the Internet is forever.'” 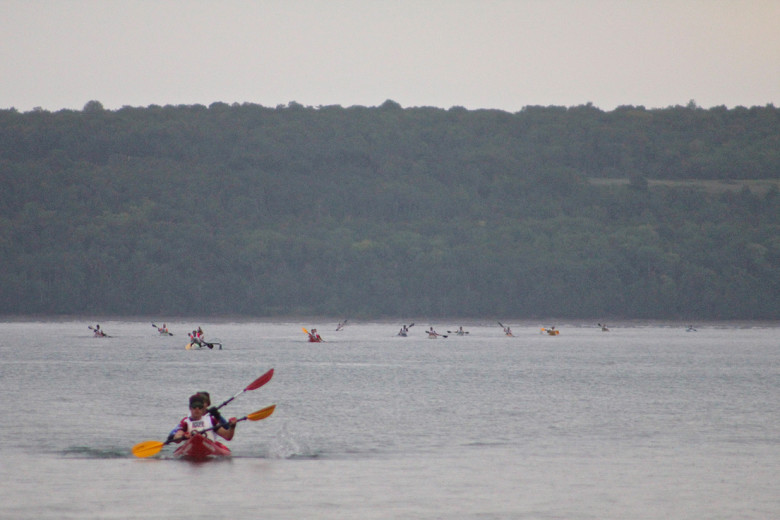 There’s something for the small fry, too. The Summer House Park Kids Race benefits the Bruce Peninsula Health Services Foundation in 2015, and manifests itself as an obstacle bike-and-run course within Bluewater Park in Wiarton, right beside a vendors village filled with live music and local food.

“An awesome feature of the Kids Race is that it features the same finish line as the big races,” says Grigg. “In 2011 we had the long course winner finish right beside a 6-year old… caught on camera of course.  A lot of people assumed that the photo was staged, but if you look closely the kid is going hard and the long course racer is genuinely and completely spent.”

In true Bruce Peninsula fashion, Grigg makes sure to note that the event proudly boasts a nearly 1:1 volunteer to racer ratio. The BPMR was pain-stakingly ran by a 144-strong volunteer army in 2014, who completed over 200 volunteer shifts.

“It’s evident that the friendly volunteers from the Bruce are really calling this event their own,” says Grigg. “And we as organizers never take that for granted.”