Skip to content
One of the best things of working with Mountain Life is the built-in excuse, the necessity even, to get out and find new adventures. For our Summer 2015 “Wheels & Water” issue of Mountain Life: Coast Mountains, publishers Todd Lawson and Jon Burak teamed up with longtime contributor Jimmy Martinello for a self-supported paddleboard mission to Cape Scott, one of BC’s wildest stretches of coastline.
-Feet Banks, editor 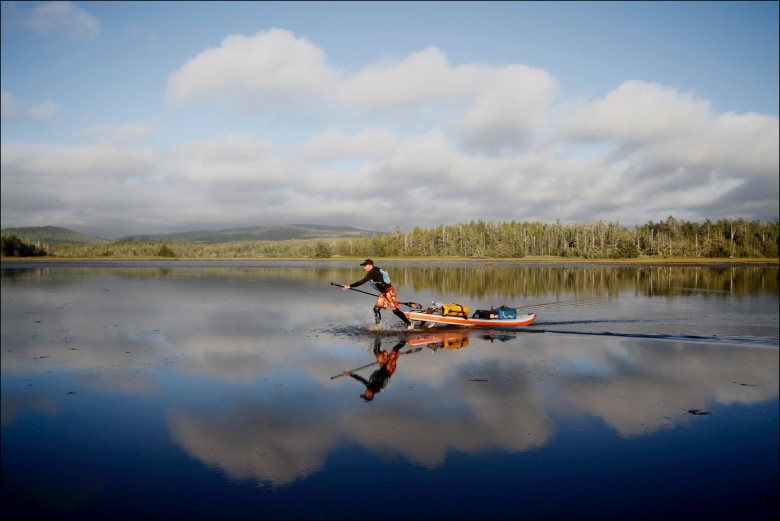 A Window into the Wild

At the northwest tip of Vancouver Island lays one of the most rugged pieces of coastline in all of North America, the spectacular, and storied, Cape Scott. Established in 1973, Cape Scott Provincial Park’s isolated rainforest surrounds a wild, weathered seascape characterized by vicious storms, deadly scenery and a few secret surf breaks. It’s also an area steeped in history — for thousands of years the Nahwitti First Nations lived in respectful abundance amongst the Cape’s imposing natural beauty. In the early 1900s, Danish settlers attempted to establish a fishing community in the area before being forced to abandon it a few years later due to the harsh climate and thick isolation. Last summer, Mountain Lifers Jimmy Martinello, Jonny Burak and I showed up with a truckload of SUPs, enough food for seven days, and a plan to explore this stunning landscape and hopefully paddle around the cape. Facing a week of untamed solitude, our window for adventure was wide open.

At the put-in, a dilapidated, hand-painted wooden sign warns us to “Expect the Unexpected,” but we have arrived already heeding that advice. This is a weeklong, self-sufficient trip on the open ocean with limited freshwater sources in an area notorious for foul weather. At least ten ships have gone down within, or adjacent to, Cape Scott Park boundaries since 1860, so we came knowing anything could go wrong at any time, and being stranded out here could mean a week’s wait for a rescue or a week hiking in the mud.

And yet, after a long day of travel and weeks of trip planning, our first taste of the Cape is perfectly relaxing. We sprawl out on one of Canada’s most stunning beaches and enjoy cold beer and steak cooked on hot rocks. Everyone is contentedly silent, happy to watch the fire flicker into the night and let nature do the talking.

Up at 5:00 a.m. to a low tide, dead calm and clear skies. The eggs, bacon, coffee and Bailey’s are perfection. Pushing off for the day’s paddle, we run into the only boats we’d see for a week, two sea kayakers who’ve suddenly decided to shorten their trip due to reports of imminent winds and weather.

The forecast is not promising, but team consensus is that we’ve come too far to give up on day one. We paddle on with a friendly tailwind gently pushing us into the unknown. As our paddles pierce the dark waters on the edge of the bay, curious seals pop up for a look. Dense forests of bull kelp sway below with the ebb and flow of the ocean. The window to adventure is still fully open.

Three solid paddle-hours later we arrive at a massive beach strewn with gargantuan white logs — old, sun-beaten cedars and fir seemingly tossed ashore like giant bones discarded by the fury of the Pacific. Some of these trees undoubtedly shared time with the Tlatlasikwala, Nakumgilisala and Yutlinkuk peoples who have explored these coasts since time immemorial.

Peering from the tent at a pre-dawn 3:30 a.m., a stiff wind slaps my sleepy face hard enough to know we won’t be paddling anytime soon. Seizing the luxury of a sleep-in, (we’re all dads with young kids) everyone hits the pillow until 8:00 a.m. and awakens to unchanged conditions. We’re at the mercy of Mother Nature, and she just might keep the window shut for a while longer.

And that’s okay. It’s good to feel small sometimes. Sipping his cowboy coffee, Jimmy says, “Let’s take advantage of what we have in front of us.” Soon the three of us are catching crisp, green Pacific waves together, soaking up the freedom of the ocean and staring out at open nothingness as the sets roll in. Clouds dance in front of the sun sending sheets of light sweeping into the forest. It’s a paddle-surf session for the books, and not a soul in sight. Sometimes the best progress is made without moving forward at all.

It’s still too windy for an early-morning escape so we comb the beach, shooting photos and searching for rare, blown-glass Japanese fishing floats. Our eyes are more focused on the ocean and sky though, hoping for a break in the weather. “Hey, it doesn’t look too bad out there,” Jonny suddenly says, during an afternoon round of impromptu Frisbee golf. “Maybe we should go for it.”

Maybe quickly turns into yes. The window finally opens and we go, fighting a manageable headwind, but knowing that if we can make it to Hansen Lagoon we’ll be in good shape despite a heavy surging swell desperately trying to force us into the rocky sea-stacks along the shoreline. Standing on our boards is no longer an option, so we kneel and sit to power through the headwind as bald eagles and chubby seagulls swirl above, and Velella velella, tiny blue jellyfish-like creatures on the ocean surface, collect in the mini whirlpools of each paddle stroke.

Hansen Lagoon stretches inland in the lee of the cape and we eventually reach the calm waters. It’s a different world, a glassy calm oasis surrounded by brilliant fertile grasslands with a sky full of wispy clouds reflecting off the shallow water. The lagoon leads us to a one-hour portage through a forest drenched in sunset light, to the next beach where we catch a couple of seaweed-filled waves before pitching camp. Cape Scott Provincial Park is definitely working its magic on us . . . even after nine hours in wetsuits.

No one realizes it as we crawl from our sleeping bags, but today will go down as one of the best in our lives thus far. With too much distance and headwind facing us to paddle the remainder of the park all the way to Port Hardy, we decide to double back and head west to the Cape itself. Smashing through the beach break and into the elements again — morning mist, wind, salt, water, sun— the magnificence of exploring the ocean on paddleboards starts to sink in. Cape Scott proper is within striking distance, but instead we heed the warning of that old wooden sign and opt for another portage. Rounding the infamously treacherous Cape would have been a stellar accomplishment (and surely the very first on SUPs), but it’s not in the cards today.

Instead, we beach our boards in Guise Bay, on what was once a very powerful place for the Yichaledzas peoples. A place “where canoes run ashore in heavy swell.” All of the West Coast’s charm lies within this magical piece of landscape — a strip of sand dunes joined by two stunning beaches, windswept trees and native grasses providing a home for deer, bear, wolves and cougars. The bay provides a living, moving canvas for us to photograph and explore. Every nook and grain of this hallowed ground seems to sing to our souls and flow with the cycles of time, water and life – a spot that reminds us why we explore.

A calm morning and a good night’s sleep deliver us in good spirits to start the day. All the better knowing we’ll be downwind for the first time with more glassy waves and a nice campsite to look forward to. We comment on how incredible it feels to be standing on the surface of the ocean with not a single boat in sight, letting the wind carry us through this mystical landscape. This coast is supposedly North America’s rainiest place, but not a speck has fallen since we started — expect the unexpected.

Striking camp at a truly memorable spot is always hard to do especially when we’ve had the place all to ourselves — but the anticipation of savouring our last day on the water eases the pain. With another solid paddle-surf session under our belts, we’re soon gliding downwind with a close eye on rogue waves and huge swell. Surprisingly, we see no whales or dolphins, but enough seals and massive sea lions to remind us that the animal kingdom is close by, we are their guests, and nature is in charge here.

Milking a few more rides on the small waves at the river’s mouth, we soon snake our way along the river and arrive back at the old ‘Expect the Unexpected’ sign. Back to reality, civilization, and an old high school friend who came to pick us up. With the gear loaded, we all take one last westward glance, both wistful and appreciative, as the window to another adventure slowly closes and the smell of salt air fades into the forest. ML