Hot off the heels of Ironman Canada comes a story that’s bound to get you out of bed. While not strictly “Mountain Life”, it certainly is worth sharing with you. 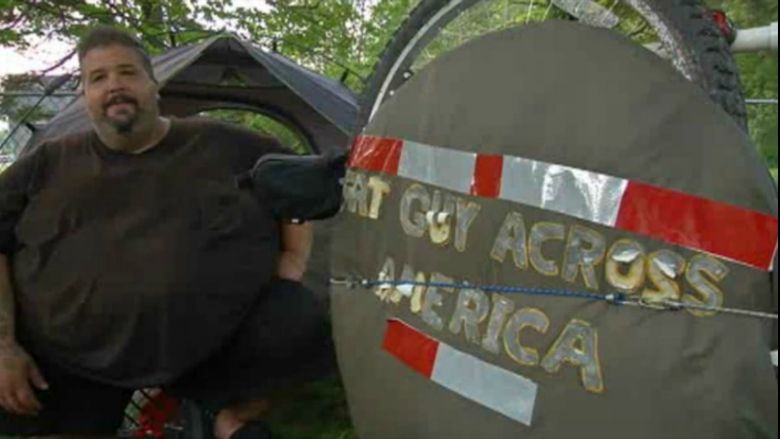 Eric Hites is a 560lb Indianan who decided to change his life for the better. Already the author of a cookbook entitled “Everybody Loves Ramen” (seriously), he has since decided that his weight has become enough of an issue to do something once and for all. Hites has commenced a cycling trip from the East Coast to the West coast. Already an impressive feat for your average Joe, he has called this his “defining moment”.

He’s doing this to prove his love to his wife, and to take control of his health once and for all. “My wife and I separated last July for many reasons, money, issues at home etc. both of us were pains in the rear. I was a slob, borderline hoarder that was so over weight and unhealthy, I could not hold or get a job. I tried but it would just not happen. So instead of working to get healthy, I tried to start businesses at the cost of my parents and eventually my father n law. I got sicker, grew depressed, kept secrets about money and kept things from her. I tried, but not as hard as I should. I should have tried to get healthy but I didn’t, I sat there and did nothing. I just let life slip by.”

And it seems to be working: just 90 miles in (144km) and he’s dropped 60 pounds. Sure, that’s just probably just water weight, but he still doesn’t have to bike that across the country. Having bent the rims to his bike, he has already acquired the attention of a local bike company that replaced them for free, as well as donations from outdoor apparel companies of rain gear (Hites is camping the whole way.)

This post is just here to let you know that you can keep an eye on this awesome journey at fatguyacrossamerica.com (the journal is especially interesting). Hites is currently in New Bedford, Massachusetts – still a long way from the finish line, but further than his front door.