Fumbling with my bra under three layers of ski Jacket, fleece and undershirt, while hovering above the skiers below the chair lift, I’m careful not to expose too much skin: my editor sits next to me, followed by my managing editor and then one lucky teenaged boy. I’m giggling the whole time and I keep thinking: am I going to get caught? I imagine the ski patrol – lights blaring and a giant speaker announcing: “Ma’am, put the bra down, ma’am, I repeat, put the bra down.”

I’m on the Southern Comfort chair at Blue Mountain and I’m partaking in a tradition I hadn’t heard about until days earlier. I’m removing my bra while on the lift, then tossing it into a tree already laden with bras. But in the olden days, it was more risqué, or so I’ve heard.

According to bra tree legends, it was panties (as they called them back in the ‘60s) and not bras that started this tradition. But when you start chucking undergarments into a tree, there are bound to be a few long tales. Some chat rooms – including ski divas and skiing history – say that bra trees began in the ‘60s as proof of some conquest the previous night. Bras or panties: it was never determined which came first, or why bras won out over panties. I suspect bras are slightly more politically correct: above the waist is safer and less offensive.

The Aspen Times, as in Colorado, places the original tree in aspen; the story goes that someone in the early ‘80s threw a bra into a tree under aspen’s Bell mountain chairlift. At one time, the tree sported 40 to 50 bras and panties. It was a sign of rebellion – you know, skiers against “the system” with the types of underwear becoming more outrageous all the time. ski patrol threatened to chop down the tree or worse, revoke the ski passes of underwear/bra shedding skiers. 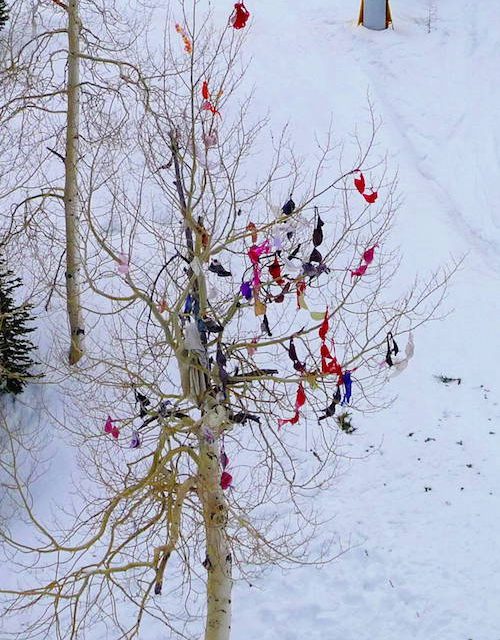 When Aspen discontinued the Bell mountain chair, the tree migrated to nearby Vail. But when families began to take over the mountain, the tree was chopped. However, ski bums united and the tree found life again: the saucy tradition eventually sprang up on another tree.

The tradition became so popular that Grand Marnier used it in a 2004 advertisement: “You just recognized a pair of panties in the Sundown Bowl tree…the conversation is waiting.”

Though the conversation is still going, some women on the discussion boards find the tradition downright offensive. I find it silly and carefree. After a successful, tree-snagging launch, I look back at my beige bra dangling amongst the others – I see a pink bra with black lace, another with paisley – I feel mischievous, yet liberated, flinging the bra in broad daylight. In such an uber-PC world, with a single toss of the bra, I feel like I’m back in a time when tossing one’s gitch wasn’t making a political statement – it was just fun.

2 thoughts on “The Bra Tree: A Throwing Tradition”