On the eve of a new climbing zone’s unveiling, a look at the complex question of access 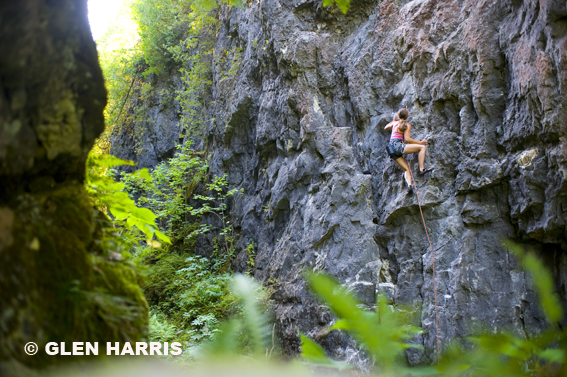 I was asked to keep the directions to myself. This newly developed climbing hotspot in the Beaver Valley was exactly what I was looking for: well-bolted sport climbing routes of all difficulties. But even with directions, I got lost in the woods. What was supposed to be a 20-minute hike in, took me two hours. Even with directions it was nearly impossible to find.

The Swamp from Mountain Life Magazine on Vimeo.

A shock wave of gossip about these routes has transfixed the climbing community. Known affectionately as The Swamp, this series of secluded limestone cliffs has seen extensive (though secretive) development over the past several years. A small group of climbers has worked year round, installing bolt anchors, clearing loose rock and making the base of the cliffs safe and easy to navigate. Yet instead of being recognized for their work, some in the climbing community have begun to criticize these volunteers, claiming they’re behaving in a selfish and elitist manner by attempting to keep the cliff for themselves. It’s true that access to the cliff has not been disclosed to the public. This is to allow development of the area to reach a level at which it is safe for the public. Still it seems the climbing public will not praise developers nearly as fast as it will criticize them. 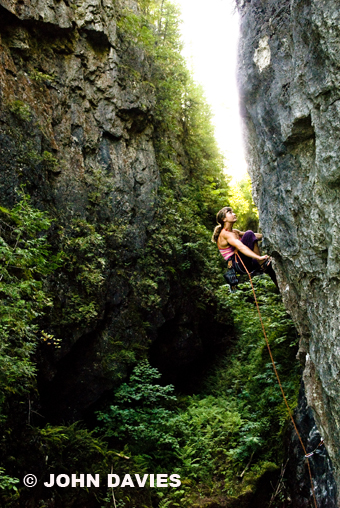 Just because a cliff face exists does not mean you can climb it. All sorts of legal, ethical and environmental concerns arise when developing a climbing area. Cliffs often stand on crown land, which allows for easy development, but they also stand on private or otherwise restricted land, which necessitates negotiations with landowners to secure access. Many landowners are wary to allow climbing access for the obvious liability factor associated with what is perceived as a very dangerous activity.

A climbing area known as Halfway Log Dump, exemplifies what can happen when climbers act irresponsibly on restricted land. Located within the Bruce Peninsula National Park, climbing was banned in the spring of 2003, after climbers developed the cliff without concern for environmental sustainability. It remained closed to climbers for seven years. Thankfully, due to negotiations by the Ontario Access Coalition (OAC) and a partnership with Parks Canada, climbing was once again allowed at Halfway Log Dump as of May 22. But not all climbing spots have re-opened. Places like Rockwood in the Grand River Conservation Authority remain off-limits to climbers.

The OAC is an organization of climbers who work to identify access issues and solve them. They have secured access to many Ontario cliffs and continue negotiations to retain access where it has come into peril. In 2009, the OAC incorporated as a non-profit business, largely to allow the organization to accept memberships. More members translate into more power to negotiate climbing access. Access work would appear to be about educating the public and convincing landowners and parks management to allow climbers to climb. However it is equally, if not more important, to show climbers that their actions have an exponential impact on how the public views the climbing community. Simple actions like practicing leave-no-trace principles, brushing off chalk, and respecting access restrictions go a long way in keeping the perception of climbers positive. In contrast, ignoring access restriction and behaving irresponsibly have an equally detrimental effect on the climbing community. OAC Director Adam Reeve explains that many climbers have a strong opinion on their (non-existent) right to climb, a lot of ideas on how to correct access problems, and little time or desire to actually get anything done.

“I am trying to help raise awareness of the situation in Ontario, so that we can work together from a common and educated perspective. Climbers generally think that land managers don’t realize what is going on with the climbing community and that their activities go unnoticed. The truth is that land managers actually are climbers too. They talk to one another about climbing, they know what’s up.”

Part of what the OAC is trying to do is educate climbers about different land management goals. Parks organizations typically have a mandate to balance recreation and preservation, but in nature reserves and conservation areas this mandate may not necessarily exist. “What parks like about climbers is our ability to act as stewards,” explains Reeve. “To stop the guy with the can of spray paint, help the lost hiker and avoid problems before they arise. We need to step it up though and be able to point out the endangered species and help land managers who are short on resources and funds accomplish their goals if we want to improve access.”

When climbers learn to respect the privilege of climbing at well-developed and safe cliffs, we will stand a better chance at gaining access to new areas – and regaining access to old ones. If we want to keep introducing our friends and families to climbing, then it only makes sense to behave in a manner that inspires people to become involved in the sport.

As for the Swamp, people will have to wait for the release of a new guidebook which will contain all the necessary information on climbing there. It’s easy to become impatient and jump to conclusions when there is so much talk about something kept tightly under wraps; but perhaps if we consider the amount of time developers put into a product that is free for everyone to use, then maybe waiting a few months is not such a big deal after all.

For more info on the OAC go to <strong>ontarioaccesscoalition.com

6 thoughts on “The Swamp Thing”